We have found that students with disabilities often find it much easier to understand and follow a visual rather than an auditory cue (such as the spoken word).  Showing a student a picture which means ‘stop talking’ is likely to be more effective than a verbal command.  In addition, visual cues are easier to fade to nothing than verbal ones.

A visual support is any visual aid that facilitates understanding by a student.

The reasons why we use them:

Some years ago we had a new young student with autism who screamed and cried all the way in to school every morning.  His mother was quite distressed by this behaviour and would sit with him outside for a while every morning in an attempt to calm him, which did not work.  Once he came in to school, he calmed and joined the class quite quickly, not an unusual event for a young student.  However, he did not show any signs of getting used to the transition into school even after several weeks, nothing changed at all.  So staff made a social story for him which said, in pictures, ‘I will walk  in to school and carry my bag with a smile on my face’.  They took him out across the school to the spot where he got out of his mother’s car, with his school bag, during the day when he was calm and happy and practiced walking in to school numerous times, showing him the social story at the start and several times during the activity.  His mother was given the social story strip and the next day, problem solved.

Example of a visual support 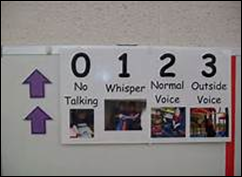 There are many types of visual support and the ones we use depend upon the student’s cognitive ability.

Simple pictures/graphics  can be used for incidentals. 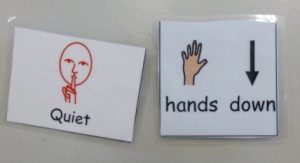 The ‘yes’ and  ‘no’ and ‘toilet’ signs encourage language and choice. 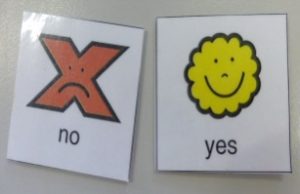 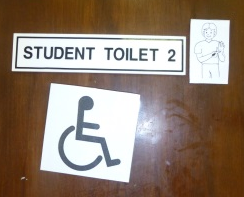 Visual scripts and social stories are a series of pictures and words used to communicate a variety of social situations. They describe different activities or events that happen in life in a step by step detailed way. 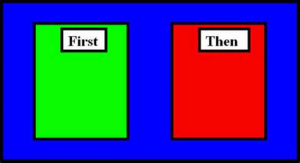 Visuals can help students to understand the idea of turn taking 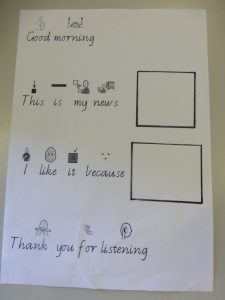 A schedule is a kind of timetable for the day.  Students with disabilities (even capable students with high functioning autism) often have a poor memory or a poor sense of passing time.  A visual schedule can therefore have the following benefits; 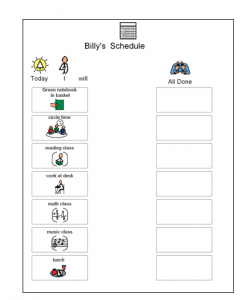 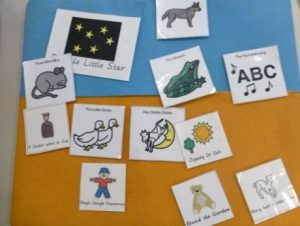 Use of “ I need a break” card, the student has this card on their desk.  If they feel the need to leave for a break but also feel unable to talk they can give this card to staff and leave. 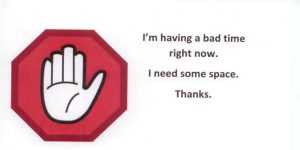 A reward chart may help a student stay on track and continue to work towards a final reward for a longer period of time.  This can have velcroed stars or a stamp. 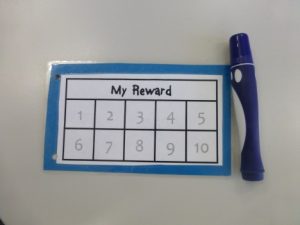 Our aim is to get close to independence, which means not constantly being told by someone what to do.  They need to tell the child 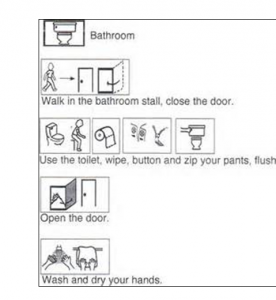 These tasks, which are familiar to a student, are put into baskets for them to do independently with no interaction from adults. 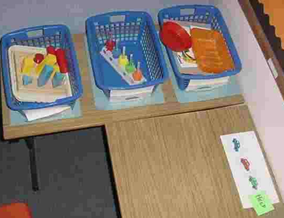 Click here to go to  a WEBSITE which outlines a variety of methods to create social stories and visual supports, some free and some paid.